For today’s opening monologue, Sebastian reacts to the media’s glorification of former DHS official Miles Taylor, who has endorsed Joe Biden in a self-righteous campaign video. Sebastian reflects on the fact that this person once served in the Trump Administration, which is indicative of just how deep the Deep State really runs in government, even nearly 4 years into Donald Trump’s presidency. Sebastian warns that such insidious actors can still present a massive threat to the MAGA agenda even if President Trump gets re-elected. 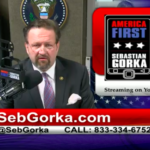 America First Highlight: How we can win the election and still lose the country: Miles Taylor