For his opening monologue, Sebastian breaks down the latest numbers from Election Day, and reacts to the Democrats’ painfully obvious efforts to steal the election right out from under our noses, even after President Trump clearly and overwhelmingly won re-election. Sebastian highlights which states will see the biggest battles over their electoral votes, and outlines how the Trump campaign can overcome the fraud and secure four more years for President Trump. 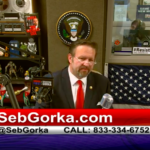