In this interview with investigative journalist extraordinaire John Solomon, Sebastian and John discuss how wide-ranging Robert Mueller’s probe really was. They highlight the fact that many of the people who were targeted, subpoenaed, and interviewed as a result have had their testimonies buried by the media, including friend of AMERICA First Dr. Walid Phares. Sebastian and John also discuss the latest developments in General Michael Flynn’s case, and whether or not his legal battle will finally come to an end soon, or if the corrupt Judge Emmet Sullivan will be allowed to continue abusing his power for a political vendetta. 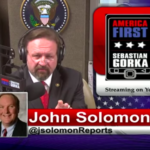 America First Highlight: How many Americans did Mueller target?