For the opening monologue, Sebastian recaps a recent firestorm he started on social media. In one of his most recent Tweets that went viral, he countered some of the Left’s prevailing narratives by pointing out one very simple historical fact: The racist Ku Klux Klan was created by the Democratic Party. This, among other truths such as the fact that the Democrats originally supported slavery, Democrat Woodrow Wilson had a screening of the racist film “Birth of a Nation” at the White House, and that Abraham Lincoln, the Great Emancipator, was the first Republican President, all led to the Left completely melting down in response on social media. 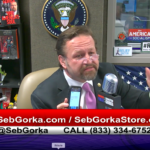 America First Highlight: How I made the Left mad.