For his first-ever interview on AMERICA First, Robby Starbuck talks about his latest article at The Federalist detailing the many ways that the far-left billionaire George Soros is actively trying to steal America. From funding so-called “grassroots” protests that lead to violence, to donating to the campaigns of left-wing candidates for local offices such as District Attorney, Robby explains how Soros’ sphere of influence truly is even larger than most may think, and why he must be stopped if America is to be saved. 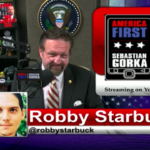