In the second monologue of the day, Sebastian absolutely tears into Admiral Michael Gilday, the 32nd Chief of Naval Operations and one of the top officers of the United States Navy. Gilday released a pathetic pandering video in which he declared that America is a racist country, and that he feels it is his job to combat racism in the Navy. Sebastian reminds him that his job is not to “fight racism,” but to keep America safe. Sebastian also points out that such a display of groveling to the leftist mob not only makes a mockery of the United States Navy, but also makes it easier for our enemies such as China to view us as much less of a threat, thus putting our national security at risk. 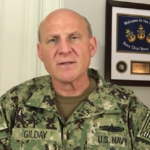