Sebastian connects to the U.K. to talk to Talk Radio’s Mike Graham about the ongoing Black Lives Matter protests in London. Mike fills us in on the violence of the protests against police officers, and explains why the U.K. police are relatively powerless to stop it. He also reacts to the rioters’ vandalizing of a statue of Prime Minister Winston Churchill, who was labeled a racist and a fascist despite being a key figure in the downfall of Hitler and the Nazis in Europe. 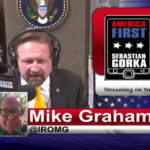 America First Highlight: He was a true anti-fascist.