In this monologue from the second hour, Sebastian utterly tears into former Secretary of Defense James, so-called “Mad Dog,” Mattis for his capitulation to the Left and the mainstream media. Mattis recently gave an interview to the far-left publication The Atlantic in which he sided with the rioters tearing apart America and denounced President Trump’s response to restore law and order. Sebastian points out that such rhetoric not only betrays his duty as a member of the United States military, but is fundamentally anti-American, and makes Mattis a bigger coward than anyone could have ever known. 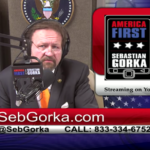