Sebastian talks to America’s Mayor, Rudy Giuliani, for two segments to discuss the current strategy going forward for President Trump’s legal team. Rudy discusses the numerous clear and confirmed instances of voter fraud in Philadelphia, which could have affected the overall vote totals of the entire state of Pennsylvania, including poll workers filling out ballots and Republican poll-watchers being physically barred from the polling stations. Rudy remains confident that all of this, and more, will be more than enough to prove that voter fraud was rampant this election cycle, and turned a Trump victory into a Biden “win.” 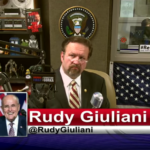 America First Highlight: Giuliani: Our plan for the President