Sebastian addresses the situation with Gina Carano’s firing by Disney and Lucasfilm, over the fact that she simply pointed out the historical background of the rise of Nazi Germany. Sebastian reads her statement in full, which proves that she is a woman who is dedicated to freedom of expression in the United States, and that is exactly why the Left is now trying to cancel her. Sebastian says that we all need to be more like Gina Carano, and must do everything we can to support her and other victims of Cancel Culture. 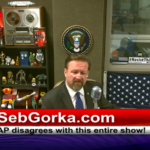