In the opening segment of the show, Sebastian talks to “Mr. Brexit,” Nigel Farage, about the rise of the far-left mob across the West, from America to the United Kingdom. Nigel laments how viciously the mob has been targeting monuments and statues to history’s greatest heroes, such as Prime Minister Winston Churchill, and points out that many such supposedly “grassroots” movements are funded by the likes of George Soros. Nigel ends with a cautionary message that we, as decent people, must never ever back down before the mob, and if we are to defend our civilization, we must stand up to the bullies and the terrorists. 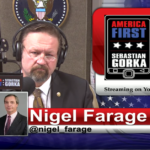