In one of his very first interviews since the ruling, Lieutenant General Michael T. Flynn joins AMERICA First to talk to Sebastian about the latest major victory in his years-long legal battle against the Deep State. Reacting to the D.C. Circuit Court’s ruling that the Department of Justice has the authority to drop the charges against him, General Flynn talks about how important it is to stand strong and keep the faith even when the odds seem impossible. General Flynn expresses his hope, despite the struggles, that America can overcome such Deep State totalitarianism and keep the American Dream alive. 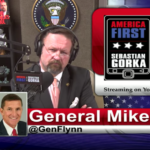