Sebastian’s opening monologue focuses on the bombshell revelations from President Trump’s team during the latest election fraud hearings in Georgia. At the hearing, the Trump team presented video evidence, from four different CCTV cameras, of corrupt poll workers in Georgia forcing all of the Republican observers out of the room on Election Night; then, after doing that, the workers wheeled out multiple large suitcases from underneath the tables in the room, with each suitcase containing stacks of ballots, which these workers proceeded to count unobserved for hours into the night. This is the exact evidence of voter fraud that the Fake News media claims doesn’t exist, but can be one of the many smoking guns that will ultimately expose the fraudulent election and secure President Trump’s second term. 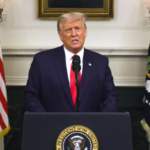