For the opening monologue, Sebastian reacts to the unbelievable news that Facebook has just announced its intentions to keep President Donald J. Trump’s account under suspension for at least two more years. Even more shocking than this is the fact that White House Press Secretary Jen Psaki openly voiced her support for the ban, comparing President Trump to a “zebra” who won’t “change its stripes.” Sebastian points out that this is pure tyranny, enacted by out of control woke corporations and supported by the Biden Administration, and is further proof of their intentions to silence all of their political opponents one way or another. The only way forward is to stand up and fight back against such censorship, and to speak out until our voices become so overwhelming that they cannot stop all of us. 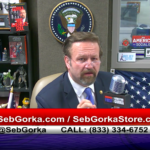