Sebastian opens the show with an exclusive report, reading from former President Donald Trump’s full official statement regarding the second impeachment trial. The statement includes his legal team’s planned defense of the 45th president, which effortlessly disputes the claims that President Trump “incited an insurrection” on January 6th, while also calling out the blatant politicization of the impeachment process as a result of the Democrats’ efforts to impeach him an unprecedented second time. 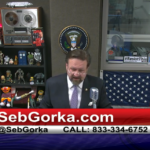