Sebastian holds nothing back in his response to the report that several hundred former Bush Administration officials have attempted to undermine President Trump’s re-election efforts by endorsing former Vice President Joe Biden. Sebastian points out that this is nothing more than a repeat of the NeverTrumpers’ efforts in the 2016 election, when the likes of John McCain and Mitt Romney tried to stump then-candidate Trump’s first bid for the presidency, which means that it is just as likely to fail now as it did back then. 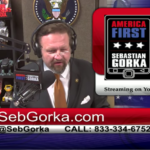