Sebastian talks to Jason Miller, a former senior adviser for the Trump campaign, to talk about President Donald Trump’s future role in the Republican Party. After dismissing the second impeachment as another partisan charade by the Democrats that will have little to no effect on President Trump’s enduring popularity, Jason predicts that President Trump will remain the kingmaker of the Republican Party going into 2024. 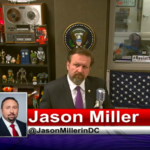