For the entire first hour, Joe DiGenova and Victoria Toensing return to the AMERICA First studios to talk about the latest on the war against the Deep State, as well as the 2020 Republican National Convention. After discussing the best speeches over the course of the first two nights, Joe and Victoria discuss the implications of the indictment of FBI lawyer Kevin Clinesmith and U.S. Attorney Durham’s 8-hour interview with John Brennan, including whether or not said interview could be indicative of Brennan turning on one of his own co-conspirators to save himself. 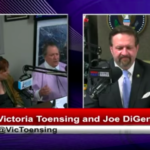