Sebastian opens the second hour with California Congressman Devin Nunes to react to the racist tirade by Tennessee Congressman Steve Cohen, in which Cohen baselessly accused White members of the National Guard of potentially being “insiders” who may threaten Joe Biden’s inauguration. Congressman Nunes points out that such a mentality, widespread on the Left, is being used as justification for the mass censorship and deplatforming of conservative voices as Biden’s inauguration draws nearer. 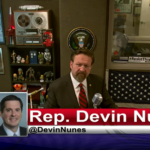