Sebastian talks with Lord Conrad Black about the coming battle over Ruth Bader Ginsburg’s Supreme Court seat. After reacting to the news that Senator Mitt Romney, a longtime Trump critic, is prepared to support holding a pre-election vote on the nominee, Lord Black discusses the possibility of strong anti-Catholic rhetoric from Democrats if President Trump nominates Judge Amy Coney Barrett. 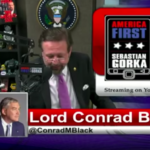