In his first-ever appearance on AMERICA First, The Federalist’s John Davidson joins Sebastian to talk about the latest revelations of voter fraud in the 2020 election. As reported in John’s most recent article, one of the Democrats’ many tactics for stealing the election includes a bizarre voter fraud scheme that specifically targeted Native Americans in the critical battleground state of Nevada. 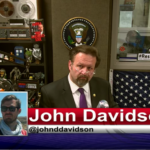