For the opening of the third hour, Sebastian and Jennifer Horn react to a disturbing and disgusting video that was aired by the children’s TV show “Blue’s Clues,” depicting a pride parade that includes a drag queen, gay couples, and “transgender” children. This video not only constitutes propaganda, but outright child abuse, by portraying these things as normal. They then cover the latest stories out of California, including left-wing protesters who opposed the removal of a mass homeless camp from a park, even though the camp was found to have contained firearms and other weapons, as well as over 700 pounds of human waste. 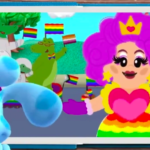