Sebastian divulges information he has received from a reliable source regarding the intelligence community under the Biden Administration. According to the source, Biden plans to utilize four previously-signed executive orders – 12333, 13284, 13355, and 13479 – to greatly expand the scope and power of both the NSA and the CIA with regards to conducting surveillance on American citizens on American soil. According to briefings given to both the House Intelligence Committee and Senate Intelligence Committee, Biden plans to use this expanded power to spy on any and all American citizens that his administration deems to be “domestic terrorists.” 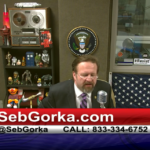 America First Highlight: Biden’s plan for the CIA and NSA