Sebastian and Professor Victor Davis Hanson analyze Joe Biden’s actions and decisions in his first five days in office, from his unprecedented record amount of executive orders to his job-killing decisions such as the cancellation of the Keystone XL Pipeline. Professor Hanson notes that many people who once supported Biden are already turning against him, such as blue-collar energy workers, and that Biden has also strained relations with world leaders such as Canada’s Justin Trudeau, early blunders that do not bode well for the rest of his presidency. 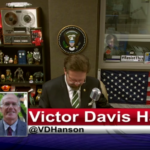