Sebastian opens the show by reacting to the disastrous summit between Secretary of State Anthony Blinken’s team and the Chinese delegation at the Alaska Summit. The Chinese delegation ripped into Blinken’s team, which bizarrely included a purple-haired woman, and declared that under Joe Biden, the United States is in no position of strength to command China to do anything. Sebastian points out that this is, unfortunately, true as long as Joe Biden is president. Unlike under Donald Trump, the United States is no longer respected since our leaders are not willing to stand up to tyrants like Xi Jinping, Vladimir Putin, or Kim Jong-Un. 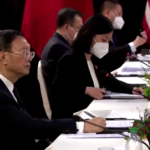