Sebastian opens the third hour with Congressman Devin Nunes. Sebastian and Congressman Nunes first discuss the Congressman’s critical role in the uncovering of the plot to overthrow President Donald Trump with the “Russian collusion” hoax, as documented by Amanda Milius in the film “The Plot Against the President.” Then, on the subject of voter fraud, Congressman Nunes gives his take with regards to Joe Biden’s recent rhetoric and behavior, and how it indicates that the man is not confident in his chances of becoming President in January. 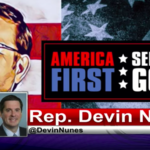