For the final guest of the day, Sebastian is joined by former Marine Jessie Jane Duff to talk about the “woke” nonsense subverting our military, the Biden Administration’s hyper-politicization of gender roles in the military, and the Left’s meltdown over Tucker Carlson’s monologue criticizing these things. Jessie points out that not only are such efforts by the Biden Administration blatantly attempting to undermine and weaken our great Military, but such rhetoric is also extremely patronizing towards women, encouraging them to be promoted higher through the ranks solely because they are women. 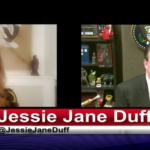