For this week’s national security update, Sebastian and The Heritage Foundation’s Jim Carafano summarize the multiple devastating implications of the failed withdrawal from Afghanistan. First, Jim points out that the failure to withdraw in a successful, organized, and timely manner was due to Biden’s purely political motivations to withdraw as quickly as possible rather than as neatly as possible, as well as the failure of military commanders to stand up to his partisan motives and tell him the truth about what a disaster it would cause. Jim then notes that, as a result of the Taliban retaking control of the country with a new stockpile of American weapons and equipment left behind, the United States is now in greater danger of a large-scale terrorist attack than we were on September 11th, 2001, almost exactly 20 years ago. Lastly, Sebastian and Jim reflect on how truly infuriating it is that the Biden Administration sees it as a higher priority to pursue, arrest, and prosecute Trump supporters simply for being Trump supporters, rather than focusing on the actual terrorist threats that now exist here at home due to the flood of illegals over the southern border, as well as the wave of Afghan refugees. 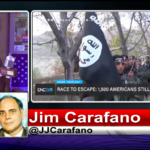 America First Highlight: Biden and the next 9/11