For the opening monologue, Sebastian reacts to a recent interview with former President Barack Obama, on the subject of “systemic racism” in the United States. In it, the man who was elected President of the United States twice claims that he is still a victim of such “racism,” and believes that despite his elections, America is still a racist country. This is further proof that not only will nothing ever satisfy the Left, but also that their crusades for “racial justice” are not truly about equality, but are instead about tearing down the fundamental ideas behind the United States of America. 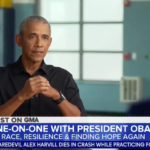