Sebastian talks to former NYPD Commissioner Bernie Kerik about the latest bombshell revelations out of both Georgia and Arizona. Producer Geoff, “Mr. G,” gives an update on the results of the Arizona audit, which confirmed just today that as many as 74,000 ballots were counted that were never recorded as being mailed out by county election officials in the first place. Combined with the latest information out of Georgia that confirmed thousands of ballots were counted multiple times in a manner that could have swayed the election there, the evidence appears incontrovertible that both states were, in fact, won by President Donald Trump instead of Joe Biden. This, Bernie says, is proof that Joe Biden is an illegitimate president, and that this is only the beginning of the fraud revelations that will completely debunk the mainstream media’s narrative about the 2020 election. 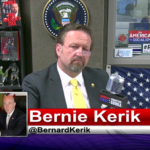 America First Highlight: AZ and GA will be Trump victories.