For the opening monologue, Sebastian reacts to two clips from Tucker Carlson’s recent interview with the ostensibly “conservative” Republican Governor of Arkansas, Asa Hutchinson, after he vetoed a bill passed by the state legislature to ban “gender reassignment” surgeries for minors. Hutchinson pathetically tries to claim that his veto, which was later overriden by the legislature, was about curtailing government overreach into the medical industry, while Tucker simply points out that it was a matter of protecting minors from a dangerous and life-altering procedure. Sebastian concurs with Tucker’s criticisms, and says that this is further proof of how much work must be done to truly solidify the Republican Party as the party of conservatives, by eliminating RINOs from the party such as Hutchinson. 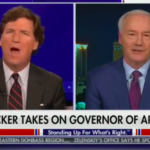