For Sebastian’s third hour monologue, he reads some of the most outrageous statements from retired Lieutenant General Russel Honore, who has been appointed by Nancy Pelosi to lead the investigation into the protests at the U.S. Capitol on January 6th. Honore, a blatantly partisan left-wing hack, has made crude and even threatening statements on social media in the past against Republican officials and voters, including President Trump, Congresswoman Lauren Boebert, and others. This is all the proof that not only is Honore horrendously unqualified to lead such an investigation in a fair and unbiased manner, but is also proof that Pelosi’s efforts to investigate the protests are also completely biased and purely political. 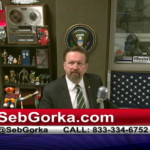 America First Highlight: Are you a Trump terrorist?