Sebastian is joined by Jenna Ellis, one of the leading members of President Trump’s legal team, to talk about the Supreme Court’s disastrous decision to not hear the Texas lawsuit, and how there are still multiple paths to victory even after the Electoral College officially casts its votes across the country today. Jenna also comments on the fake media outrage over some conservatives’ refusal to refer to Jill Biden by her phony title of “doctor,” pointing out that Jill Biden is not a real doctor. 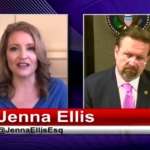