In his second-ever interview on AMERICA First, the 45th President of the United States, Donald J. Trump, returns to the show to give his thoughts on the latest breaking stories of the day. First, to address the Fall of Afghanistan, President Trump describes Biden’s efforts as a total failure and says that had he been President when this withdrawal took place, the government would not have collapsed; he also explains how, if he were in charge of the withdrawal process, he would’ve guaranteed that any remaining American military equipment would have been removed well before the withdrawal deadline, and most of the abandoned military bases would have been demolished so that they could never potentially be used by hostile forces. President Trump also connects this disaster to the ongoing crisis on the Southern border, lamenting how Biden inherited the most secure border in modern history and completely destroyed the immigration system, allowing for hundreds of thousands of illegal aliens to flood into the country in an all-out invasion. He also discusses the voter fraud that stole the 2020 election from him, and hints at the possibility of running for a third time in 2024. 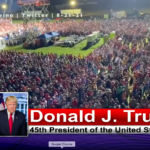