In her first-ever appearance on AMERICA First, The Federalist’s Emily Jashinsky joins Sebastian to talk about several of her latest articles. After first discussing the implications of Bari Weiss’ resignation from the New York Times, and what it means for how far Cancel Culture will go, Emily explains how the idea of the Silent Majority – while sometimes useful in presidential elections – will not be enough to win the Culture War. 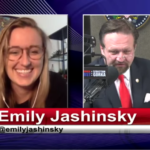