For the first guest in-studio after Memorial Day weekend, Sebastian sits down with Jim Hanson to discuss his new book “Winning the Second Civil War Without Firing a Shot.” Sebastian and Jim reflect on how one of the greatest shortcomings of the Right during the Trump presidency was its failure to quickly and efficiently restaff the entirety of the federal government during his four years, something that the Left never fails to do whenever they seize power. If Republicans are going to reclaim power anytime soon, then they must take full advantage of a possible 2024 victory to completely clean out the federal agencies and bureaucracies and replace them with fighters who are loyal to the MAGA agenda. 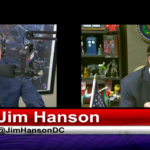