Alexandria Ocasio-Cortez rode into Washington, D.C. promising to fundamentally change the nation’s politics by making it overtly Socialist. Some things that she had argued in favor for ranged from the impractical to the inane. For example, while making her argument in favor of Medicare-for-All, Cortez stated that the program (with a projected cost of $32 trillion) could be paid for by cutting America’s defense budget and sending those funds to pay for her new Medicare program. Cortez erroneously believed that the defense budget was $21 trillion. In fact, it was less than $800 billion.

Undeterred from her fact-free spree, Cortez became an early advocate for a Millennial fantasy: a “Green New Deal.” Pushed by a radical Leftist environmental group and popularized by the “democratic socialist,” Sen. Bernie Sanders (I-VT), Cortez picked up the baton that Bernie dropped after his Super Delegate-charged defeat in the 2016 Democratic presidential primary to Hillary Clinton. Before she was even sworn in, Cortez led a group of protesters to the office of then-House Minority Leader Nancy Pelosi (D-CA) to demand that Pelosi not run for another round as the Democratic speaker of the House in the next Congress. Their reasoning was simple: Pelosi was a Democrat who had spent years accepting money from corporations that oppose a Green New Deal. Therefore, Pelosi (and most other Democrats) were unworthy of the position.

The Green New Deal, like Cortez’s “Medicare-for-All” inanity, is simply a disaster-in-waiting. Cortez has asserted, it’s up to America’s new leaders on the Left to push American innovators to “invent technology that’s never even been invented yet.” She made this tautologous assertion in the context of the Green New Deal. This plan entails drastic reductions in America’s carbon production. According to Global Warming scaremongers, the biggest contributor to Global Warming is the excess carbon (and methane) that modern industrial nations produce.

In order to curb this pollution, Cortez (and a coterie of other Democratic leaders) believe that massively investing in clean-energy jobs and infrastructure would transform the country’s economy and make it less damaging to the overall environment. In other words, Cortez and her comrades plan on massively raising your taxes to pay for a transformative political project that would result in the hallowing out of entire industries; would reduce the efficiency of America’s much-needed energy grid; and establish a program that would utterly devastate the country and our economy, which is currently the strongest it has ever been. Since 1776. Cortez thinks that the Green New Deal would save the country from the effects of Global Warming. It would merely make the citizens of this country destitute, as once-reliable industries were minimized and replaced with industries offering far less gainful employment and strategic uncertainty.

To achieve the Green New Deal’s goal of ending what proponents have dubbed as the United States’ “dependence” on fossil fuel for energy by 2030, the cost would be “somewhere between $700 billion and $1 trillion per year.” That’s basically funding another Defense Department. This explains why Cortez has been calling for massive tax hikes on higher-income earning Americans.

Meanwhile, Tyler O’Neil at PJ Media, recently calculated that over a decade, if it were passed, the Green New Deal would cost taxpayers $49.109 trillion.

Creating a Green New Deal has become the centerpiece of Alexandria Ocasio-Cortez’s existence. But, don’t laugh too hard. The House of Representatives passed a bill in 2009 that formed the basis for what’s now become known as the Green New Deal, in the form of the American Clean Energy and Security Act. Thankfully, it was squelched on the Senate Floor in 2010. But the nightmare did not die. And, now, Cortez is leading the charge to reconstitute it.

Understand that similar schemes have been tried in Europe. For example, Spain instituted a sweeping Green New Deal that resulted in absolute devastation of the Spanish economy. In 2011, the American Enterprise Institute reported that:

Since 2000, Spain spent 571,138 Euros on each green job, including subsidies of more than 1 million Euros per job in the wind industry. The programs creating those jobs destroyed nearly 110,500 jobs elsewhere in the economy (2.2 jobs destroyed for every green job created).

Only one out of 10 “green” jobs created in Spain remained permanent. And, as AEI claimed, “Each ‘green’ megawatt installed destroys 5.28 jobs elsewhere in the economy on average.”

To compound matters in Spain, the economy’s “green” energy producers, on top of not being able to deliver what fossil fuels could deliver, ended up needing massive government support which encourages endemic corruption and a collapsed national economy. 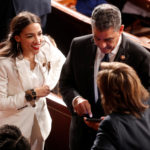