On the radio show yesterday, Turning Point USA founder, Charlie Kirk, claimed that Alexandria Ocasio-Cortez was a “symptom” of the decline of America’s political culture rather than the cause of it. Kirk remarked that Cortez was a shining example of the kind of student that America’s broken university system is producing today in that she is “constantly wrong but never in doubt” about her Marxist beliefs.

Cortez campaigned on a platform that was openly socialist. Her platform was not based on fact, it was instead predicated on feeling. Like so many of her generation, Cortez pointed out problems she had personally faced living as a young person in New York City. The cost of living in Cortez’s district is high and adequate employment opportunities are hard to come by. Yet, these circumstances are not the result of unfettered capitalism. Instead, they are the outcome of decades-worth of socialist policies enacted by a spate of New York State and the city’s Democratic leaders.

Rather than being able to identify the source of her (and those of her constituents) woes, Cortez jumps to blaming the capitalist economy that the United States has long enjoyed and which has brought prosperity to hundreds of millions over the ages. Cortez is a true believer of the worst kind. She will brook no compromise with her political opponents on the Right and she is utterly convinced that her vision for the future of the country is the purest of all.

Throughout her campaign for office and her subsequent (short) tenure in office, Cortez has made a bevy of false and factually misleading statements. Among her inaccuracies was her claim that $21 trillion had been lost out of a defense budget of only $770 billion. Cortez argued that the magic $21 trillion spent on defense should instead be spent on Medicare-for-all. The assumed cost for Cortez’s Medicare-for-all scheme would be around $32 trillion–or almost ten times the whole federal budget! Everyone from Anderson Cooper (no friend of either capitalism or the American Right) to the Washington Post came down on Cortez for her blatant falsehoods.

In fact, the Washington Post took the rare step (for a Left-wing publication against an openly socialist politician, like Cortez) of giving Representative Cortez a four-Pinnochio-rating (meaning she was full of lies). To which, “AOC” lamented that “people are more concerned about [her] being factually correct than morally right.”

During the days of the Soviet Union, the Communists used to claim that the truth was whatever the Communist Party said it was. In other words, facts don’t matter; the truth is relative, and only the party’s ideology was important (see George Kennan’s incredible Long Telegram for his analysis on what real Communism is).

Cortez believes that, whatever the problem, the solution is socialism and more government power over our lives. But, she does this despite the lessons of history. In fact, over 40 countries have tried Marxism as a solution to their political and economic woes. Each one of those systems ended in failure and created more problems and more tyranny than what had existed before the rise of Marxism in those countries. What’s worse is that Communism killed over 100 million people worldwide throughout the 20th century.

Today, Venezuela is collapsing after having lived under the Hugo Chavez-inspired socialist revolution since 2002. In Venezuela, a country blessed with vast oil resources, people are so bereft of hope and sustenance that they’ve taken to eating their dogs, cats, and any other animal they can find (while the current Venezuelan leader, Nicolas Maduro, eats five-course meals every day like a king).

Here is a stunning video documentary done by the famous satirist, Ami Horowitz, from when he traveled to Venezuela recently:

What Horowitz documented is how socialism ends. Every time. In the recent midterm elections, 40 Democrats ran as overt socialists. Alexandria Ocasio-Cortez was among this lot. They, like she, are deeply committed to bringing socialism to our shores here in the United States, after our country spent a century resisting it abroad.

Even in countries that Senator Bernie Sanders (I-VT) claims are “socialist,” such as the Netherlands, the leaders there are becoming aggravated with being called “socialist.” To these leaders, the European countries, are not socialist states. They are capitalist countries with very expense welfare systems–systems that are, in fact, bankrupting those countries.

Not only has AOC has been consistently proven to be factually incorrect. Her belief system is bankrupt morally as well as intellectually. And, her ideas will lead this country to ruin, just as they have in every country where socialism was tried, at the cost of millions dead. 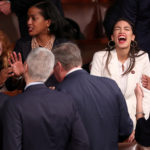 Alexandria Ocasio-Cortez is Wrong About Socialism