Last week, the Democratic Party in the New York state legislature overwhelmingly passed a law allowing for late term abortion. Upon the passage of the bill, the New York Democrats held a press conference announcing the successful passage of the bill and were caught on camera giddily laughing and ecstatically celebrating their “victory for women.” Meanwhile, in Manhattan, One World Trade Center was lit a vibrant pink—the color of Breast Cancer Awareness—to celebrate the Democratic Party’s legislative win.

To understand what differentiates late term abortions from the traditional method of abortion is that a fully-term baby can be murdered in utero up until the moment the mother is giving birth. Also, should the child survive execution in the womb, that child is not entitled to any medical assistance. It will be left to die. What’s more, thanks to the bill, no doctor is now necessary for the procedure to be conducted, thereby ensuring that no life-saving measures will be taken should a baby survive this Mengele-esque medical procedure.

When the Left managed to make abortion the law of the land with the landmark Roe v. Wade Supreme Court case, they promised skeptical Americans that the law would ensure abortions would be “safe” and “rare.” Rather than forcing women who preferred to rid themselves of unwanted children through unsafe means, the Left wanted to give the deadly practice an air of respectability. So, they “medicalized” the process. “No more back alley abortions!” The Left yelled at Pro-Lifers on the Right. But, with the passage of the New York late term abortion legislation, even the thin veneer of medical credibility has been removed.

The Democrats keep arguing that abortion is about protecting women’s rights and their health during an abortion, yet, the New York law proves that their obsession with abortion has little to do with women’s rights. It is plainly about killing unwanted children. With that, the Left proves yet again that it has a culture of death underlined by hedonism and empty materialism. Babies, the most innocent form of human beings imaginable, are extinguishable to the Left because they are “inconveniences” to the mother, to society, and to the state. Other materialistic arguments, such as those posited in the popular 2005 economics book, Freakonomics, make the horrific argument that, since most children aborted are from poor mothers, the 60 million abortions that have occurred since the passage of Roe v. Wade likely saved society from a massive drain on welfare programs; an increase in poverty; and a wave of violent criminals who were aborted before they were even born.

Margaret Sanger, the racist eugenicist, who was an early advocate for abortion in the twentieth century, would be proud. It was Sanger, after all, who envisaged abortion as a tool to extinguish the unwanted poor and ethnic minorities of society before they could become a drag on society. Since the passage of Roe v. Wade, the Center for Urban Renewal and Education assesses that of the 60 million children aborted, 20,350,000 have been African-American. In fact, they conclude that “abortion is the biggest single negative force on black American growth.” And, according to a 2017 Guttmacher Institute study, 49 percent of all women who’ve had abortions in the United States have been below the federal poverty level.

Of course, the Freakonomics argument falls flat as well.

Who’s to say that these aborted children would not have figured a way out of their family’s poverty, contributed to our society, and lived the American Dream? How can anyone know what the future would have held for the lives of these children who were erased before they could have even lived those lives? Some of America’s greatest entrepreneurs; its greatest innovators and leaders have come from humble beginnings. And, who’s to say that the mothers of these aborted children would not have recognized the inherent beauty and humanity of these murdered children and did whatever they could to provide a safe, happy life for them?

Or, why not simply bear the children and put them up for adoption?

Abortion has become the law of the land. An entire cottage industry dedicated to the mass murder of babies has been established by the Left in the form of the government funded Planned Parenthood. Women today are inculcated into believing that abortions are as normal as getting a pap-smear. But, you and I know the truth. Part of the problem is that women cannot see their child when it is the womb. It is only with modern technology that these desperate mothers can see the face of their unborn babies smiling back at them. With ultrasound and now 3-D imaging, mothers who might be in favor of abortions can literally see their baby as it grows within them. Expectant mothers who are considering an abortion can experience God’s awe and beauty in their wombs up-close as opposed to believing it to be nothing more than a “clump of cells.”

One organization, Save the Storks, has dedicated itself to working with mothers who might otherwise opt for abortions; to make them see that there is a human being inside of them and that an abortion would extinguish that unique, growing child—all because the mother is scared and inconvenienced. This group works with expecting mothers to get them high-resolution images of their babies in utero. Rather than judging the mother for having been irresponsible with her body (which led to the pregnancy), Save the Storks just wants these mothers to see their children. By seeing their children, the hope is that these mothers will recognize their inherent humanity and make a decision other than abortion. Perhaps they could adopt; or maybe they might try to raise the child.

Save the Storks is a private organization that has literally saved more than 5,000 babies since it was started just five years ago. Yet, their work would have been unnecessary if, instead of making every form of infanticide legal, the Democrats had just made the adoption process easier. But, that would have been too easy. For the Left, abortion has never been about making life easier for women. Abortion has been about eugenics; it has been about making sure undesirable people do not come into being.

Given the data provided about how many African-Americans have been slaughtered since the passage of Roe v. Wade—more than 20 million babies—it is clear that Margaret Sanger’s racially-charged program of eugenics is the true purpose of the Democratic Party’s support for abortion. The Left wants to exterminate those they believe are inferior and unworthy of life, and to have a tool to erase the consequences of their self-centered philosophy of life.

The New York law was not a victory for women. It was a death sentence for children and a curse to women everywhere. 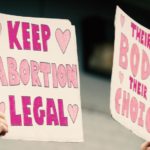 Adoption, Not Abortion, Will Save Our Culture