There are two marches that have defined national politics lately. The first is the March for Life and the second the Women’s March. It’s been argued that the country is divided in half, that the fighting today is between Left and Right, Blue States vs. Red States. Charles Murray has assessed that, since the 1970s, Americans have “self-sorted” into mostly like-minded socio-economic and political enclaves. The differences between these two popular political marches underscore the divide in America today.

And the dissimilarities between those who March for Life and those who claim to march for women could not be starker.

These two marches, while representing two distinct visions of America, are inextricably linked together in the tragic reproductive politics of modern America. Specifically, this is about the ongoing debate of abortion. The March For Life, as the name suggests, takes to the streets to protect the innocent life of unborn children everywhere. Compare this to the Women’s March, which is predicated on the idea that women, in their capacity as the child-bearing sex, have an inherent right to determine whether or not a child can be carried to term. In other words, the Women’s March (on top of being overtly anti-Trump) is about defending the right of women everywhere to use abortion instead of contraception. An when faced with the consequences of their irresponsibility—the conception of an innocent child—they choose to kill that child because of its inconvenience to them. Even the New York Times has admitted that less than 1% of all abortions occur because a woman conceived after being raped of because of incest.

The March for Life came into existence in 1974, in response to the Supreme Court’s Roe v. Wade decision which legalized abortion. It was meant to demonstrate that many Americans—the silent majority—were opposed to the legalization of abortion. Each year, the marchers meet in Washington, D.C. on the Mall and march to the Supreme Court building. The march has always been peaceful, attended by thousands of ordinary Americans—sometimes in the nastiest of inclement winter weather—who just want to come out to show their support for defending innocent lives. Over the years, this event has become increasingly youthful in its attendance. In 2016, the Washington Post reported that at least half of those who attended the March for Life were under the age of 30.

Organizers for the event post rules for decorum on their website, advising marchers to keep their voices low when marching; they insist that marchers avoid conflict and respect all law enforcement officers and whatever requests city officials may make of them. A variety of religious groups from the Christian and Jewish faiths also partake in this momentous defense of the unborn.

In contrast, the Women’s March attracts the most radical of feminists. Not only has the Women’s March protested President Trump by having speakers, such as Madonna, openly celebrate the idea of violence against the President, but regular attendees have engaged in disturbingly provocative political protests ranging from graphically simulating abortions to holding up signs advocating for the use of force against Republicans.

The Women’s March is a testament to the vanity and self-absorption of the Left. The entire goal is to undercut the case for Donald Trump’s presidency while at the same time promoting the ever-decreasing standards for unfettered infanticide.

By way of illustration, look at the organizations that have supported the Women’s March in the past: Planned Parenthood, the New American Leaders Action Fund, a 501c group with extensive ties to radical Left-wing politicians and organizations, The Center for Popular Democracy Action, and Living United for Change in Arizona, the increasingly partisan ACLU, and the American Federation of Teachers.

But, that’s not all. More recently, the Women’s March been caught up in a scandal, the nature of which, is becoming increasingly common a controversy on the Left, namely: Antisemitism.

Initially, the movement was co-chaired by none other than Louis Farrakhan. This, coupled with the rise of overtly anti-Semitic Democratic leaders in the House, such as Rep. Rashida Tlaib of Michigan and Ilhan Omar of Minnesota, led to such negative press coverage that the Southern Poverty Law Center and the Democratic National Committee itself removed their names from the sponsor list, and even Debbie Wasserman-Schultz decided to dump the Women’s March at the last minute.

The differences between the two groups are clear: one fights for the respect of all life—especially the unborn—and the other rages against life in defense of the banal, selfish, and hateful. This week, thousands of mostly young Pro-Life activists along with ordinary Americans marched peacefully in the frigid streets of Washington. While the Women’s March, despite the loss of major sponsors and the intense negative press coverage has done great damage to the anti-Life movement. Don’t be fooled: the Women’s March isn’t about women at all. It’s about politics and a culture of death rained upon the most defenseless of society, the unborn. (If you want to support an organize that has saved 5,000 babies in just the last few years by using the last technology to show their mother’s the human life that is growing inside them, please donate now to Save the Storks https://savethestorks.com/) 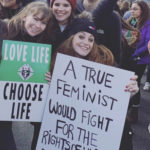 A Tale of Two Marches