The 2016 election was a referendum on many things that had once been accepted as political norms in our society, including taking the media’s word at face value, believing all the polls, and always choosing the candidate with more beltway “experience,” rather than taking a leap of faith and electing a truly revolutionary candidate.

By electing Donald J. Trump, we not only changed the course of history and dashed all of those norms to pieces, but we also made a stand that we would no longer settle for a blatantly corrupt political class that repeatedly gets away with crimes for which many of us would serve years in prison.

Perhaps no candidate in modern history better represents such arrogance and defiance of the rule of law than Hillary Clinton. Over the course of her nearly 40 years in public life, Hillary has racked up enough scandals, and outright crimes, to put Frank Underwood to shame.

Although there are a plethora of wrongdoings by Hillary Clinton we could enumerate that alternate between the offensive, the immoral, and the hypocritical, we are going to provide a more concise list of the most patently criminal acts Hillary Clinton has committed during her political career. The media has tried to label these crimes “conspiracies,” but they are all the truth, and nothing but the truth.

Some of the Clintons’ earliest crimes have become their most oft-forgotten, even though they had their fingerprints on a number of cases of extremely shady business practices, including potential insider trading and bribery, in the late 1970s and the 1980s.

The most infamous example is the Whitewater controversy, in which then-Governor and First Lady of Arkansas, Bill and Hillary Clinton, invested in the real-estate company Whitewater Development Corporation, which was owned by two of their closest associates at the time, James and Susan McDougal. The McDougals also owned a savings and loan association called Madison Guaranty.

Both Whitewater and Madison Guaranty eventually went under, after the Clintons had invested tens of thousands of dollars into the former.

In what appeared to be an attempt to pay back the McDougals, banker David Hale eventually testified under oath that Bill Clinton attempted to pressure him into giving a $300,000 loan as a bribe to Susan McDougal. Although the McDougals were eventually charged with a variety of crimes including fraud, no charges were ever brought against the Clintons for their involvement in it.

This would prove not to be an isolated incident, as Hillary herself eventually came under fire for a similar financial irregularity in the late 1970s. After trading in cattle futures contracts with a starting investment of just $1,000, she netted a return of almost $100,000 after just ten months before stopping her trading. Such a sky-high profit is extremely unlikely to happen naturally, and although a number of scenarios were proposed – including bribery and insider trading – Hillary faced no charges again.

Projection has become a favorite distraction technique for the Left, especially with the media serving as their mouthpiece. While baseless allegations of Russian “collusion” have been relentlessly thrown at President Trump and his Administration, the real instances of collusion between a high-ranking U.S. official and Russian forces come from the other side of the political aisle.

For a number of years, the Clinton Foundation – a supposedly “charitable” organization – served as the front for many of the biggest payments to the Clinton family by those seeking influence, both domestic and international.

But the most glaring example of such a pay-to-play scheme involving the Clintons and a foreign actor is the Uranium One case. Uranium One is a Canadian uranium mining company that first acquired another Canadian mining company, UrAsia Energy, before Uranium One was subsequently acquired by the Russian state-owned corporation Rosatom.

It was eventually revealed – by The New York Times, of all sources – that UrAsia’s owner Frank Giustra had donated as much as $145 million to the Clinton Foundation just two years before selling his company to Uranium One for $3.7 billion. Then it was revealed that the chairman of Uranium One, Ian Telfer, had also made a donation of over $2 million to the Clinton Foundation before the company’s acquisition by Rosatom.

Shortly after the successful acquisition of Uranium One – which took place during Obama’s first term, while Clinton was Secretary of State – Bill Clinton was paid $500,000 by the Russian bank Renaissance Capital to give a speech in Moscow. Not so coincidentally, this took place just a few months after Obama signed the “New START” nuclear treaty with Russia, an initiative that was spearheaded by Secretary Clinton. Although the treaty proved to be a disaster that most likely will not be extended, the Clintons did walk away with a significantly fuller bank account.

What this all boils down to is a clear-cut case of the Clintons organizing a massive international deal that saw a significant amount of uranium – a key natural resource that is fundamental to national security and American dominance on the world stage – signed away to Russia. The Clintons bargained with nuclear capabilities and completely sold America down the river, just so they could make millions. This can only be described as “collusion” and “pay-to-play.”

Emails and the Espionage Act

This is perhaps the most significant of Hillary’s scandals, not only because of its central role in her 2016 loss, but because of the sheer hypocrisy that was highlighted as a result.

Using an unsecured private email server for government use, of course, is a crime in and of itself. But in true Nixonian fashion, Clinton took it a step further by covering up the underlying crime. She initially refused to turn over the server in question, even as she used the server’s eventual breach by hackers as supposed “proof” of Russian interference. When the server was finally handed over to the FBI, it was done only after more than 30,000 emails had been erased, with Clinton claiming – without evidence – that all of the deleted emails were “personal.”

When further questioned about deliberately wiping the server, Clinton gave a response that feigned ignorance but reeked of arrogance, sarcastically asking “What, like with a cloth or something?” It’s not hard to imagine that if President Trump had made a similar statement, the media would have an absolute field day with such a response, and use it to call into question his intelligence, integrity, or even his ability to hold the office. But Clinton, as always, got a free pass from the media.

This deliberate obstruction of justice, and subsequent destruction of evidence, was the same crime for which Richard Nixon was ultimately driven out of office. But Clinton’s mass deletion of evidence was on a vastly larger scale than the mere 18 minutes of Watergate tapes that Nixon erased, and the bungled burglary he tried to hide. And furthermore, with a wide variety of matters discussed and shared on Clinton’s private server, it’s clear that far greater national security risks were taken by Clinton than by Nixon, who only sought to cover up a single crime that was relatively petty by comparison.

In both cases, the cover-up far exceeded the original crime. But while both of them eventually did face consequences, Nixon at least did so on his own terms and eventually admitted to his own wrongdoing, resigning the office in atonement. Clinton actively sought to take the highest office in the land even despite her crimes; her comeuppance delivered by the American people at the ballot box, in perhaps the greatest act of non-judicial justice ever administered in modern American history.

By far the most serious crime that Hillary Clinton ever committed is the one that produced an actual body count. As expansive, egregious, and unpunished as her other crimes may be, nothing compares to the scandal in which then-Secretary of State Clinton took a series of decisions that directly led to the deaths of four brave Americans, only for her to then lie about the circumstances of her deaths and cover up her own involvement in them.

Ambassador to Libya, J. Christopher Stevens, made numerous requests for security at the U.S. mission in Benghazi to be increased, as he feared for his own safety and the safety of the other Americans present at the compound. All of these requests were denied time and again by Secretary Clinton’s State Department, a fact that even the left-wing “fact-checking” website PolitiFact has admitted to be true.

This failure to provide more security left the compound all the more unprepared when the terrorist group Ansar al-Sharia launched its fatal attack on September 11, 2012, killing Ambassador Stevens and three other Americans: Information Officer Sean Smith, and CIA operatives Glen Doherty and Tyrone Woods, who bravely fought to defend their fellow Americans against overwhelming odds.

But in true Clintonian fashion, Hillary just couldn’t stop with the original scandal and had to rush to cover up her own culpability. Rather than accept blame for blatantly refusing to tighten security at the Benghazi mission, Clinton and others in the Obama Administration made shallow and disingenuous attempts to claim that the attack was not the result of a well-coordinated plan by a terrorist organization on the anniversary of the 9/11 attacks.

Instead, they insisted, the violence was supposedly the result of a spontaneous demonstration against an anti-Muslim YouTube video that virtually no one had ever seen before. To this end, the Administration ordered then-United Nations Ambassador Susan Rice to repeat this cover story on five different Sunday news shows on the same day.

The man responsible for creating the YouTube video, an Egyptian-born U.S. resident named Nakoula Nakoula, was subsequently arrested, charged, and paraded around as the scapegoat for the entire attack. Clinton even had the audacity to “promise” to the families of the victims that the Administration would hunt down and punish not the terrorists who actually killed their loved ones, but the filmmaker whom she blamed, as if he was somehow in part responsible for those deaths.

Keep in mind, in terms of the sheer quantity of wrongdoings attributable to Hillary Clinton, this list consists of just a fraction. The fact that she got away with all of these is a testament to the legal double-standard from which the corrupt elite benefits. There have been other, even more in-depth studies and compilations of her actions – and subsequent lack of consequences – by such men as Peter Schweizer, in his best-selling book Clinton Cash.

Although she consistently managed to escape legal consequences for her actions, the Clintons’ decades-long streak of getting away scot-free finally came to an end, at the hands of 63 million Americans, on November 8, 2016. Even if Hillary never spends a single day in prison for any of her crimes, from the millions of dollars of dark money to the lives lost on her watch, the eventual final political outcome for her – fading into irrelevance, with a lost presidential race as her last accomplishment – just might be the most satisfying outcome possible. 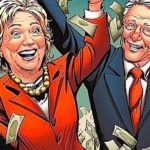