German Chancellor Angela Merkel believes that Germany must replace the United States as the leader of the Free World.

Because the rise of nationalism threatens the European Union, which, therefore, threatens German power. In her annual New Year’s Eve address to the German public and Europe, Merkel, who is set to leave office as a failed chancellor in 2021, argued that Trump’s America was leading the so-called “international order” to ruin. According to Merkel, Global Warming, international terrorism, and mass immigration are the greatest threats affecting the planet today and only more international cooperation—globalism—can solve these issues.

Yet, don’t let Merkel’s rosy language distract you from the reality: Merkel and the German government are as self-interested as the nationalist-populists they loathe are. Whereas the #MAGA brigades in the United States or Brexiteers in the U.K. insist on respecting their sovereignty as a national interest, Germany views preserving open borders and “free trade” as being in its national interest.

Why wouldn’t Germany view it this way?

Without the EU, the Germans would be nothing more than a middle power. Yet, Germany has long aspired to be much more than just a central European state. And, after the end of the Cold War, Germany prospered more than most countries in the post-Cold War neoliberal order that the United States built.

Since Otto von Bismarck united Germany following the Unification Wars in 1871, successive German leaders have envisaged Germany sitting atop a pan-European state. Yet, these lofty dreams could never be realized militarily, with blood and iron alone (as Bismarck believed it could be). After losing two world wars and having existed as a conquered people, divided between the Soviet Union and the United States during the Cold War, any German desire to achieve dominance on the battlefield evaporated. But the yearning to be more powerful than they were remained. And, what Germany could not achieve through blood and iron, it quickly learned to accomplish with pen and paper. After the Cold War, Berlin traded its battlefield prowess for power in the boardroom–a model that has served Germany better than most.

Today, the European Union exists in name only. It is, in fact, nothing more than the German Union. Because the EU is a financial suprastate, the country with the strongest economy dominates that system. Germany has long been an economic juggernaut; it is the most productive economy in all of Europe. The fact that the EU exists with open borders and adheres to a free trade model only empowers Berlin more (at the expense of most other European members, notably those in southern Europe). Germany cannot afford to see a resurgence in nationalism and state sovereignty because that would directly weaken the power and influence of Berlin, relative to the other members of the EU (and throughout the world).

Merkel’s New Year’s Eve speech is ominous. She charges Trump and the other nationalists rising to power globally with being threats to their world order and stability. In response to those who say they want their national interests preserved and their borders protected, Merkel rapidly expands German military spending. Berlin is clearly threatened. Of course, the German military is nothing like it once was before the Second World War; the warrior ethos there has been smothered by political correctness and democratic socialism. Still, beneath the soft surface of globalist fantasy lies a well of cold-hearted reality.

For decades, American leaders have begged Germans to properly fund their military. Berlin has refused. They allowed their military to become a farce. Suddenly, though, when Donald Trump becomes president and begins putting the interests of Americans ahead of Europeans, Germany decides to start funding their military again. They didn’t do this when the Russians  invaded Ukraine. They did it when President Trump wanted to protect American interests. Globalist Germany is building their military to balance against Trump’s nationalist America. Berlin fears that the free-trade train that took Germany to economic dominance and geopolitical power is about to be derailed by an American leader who is tired of watching everyone else get rich at America’s expense.

Germany is as self-interested as Trump and other nationalists are. Unlike Trump, however, Merkel views German interests as being best served by ensuring Berlin rules over Europe (just as Kaiser Wilhelm II and Adolf Hitler dreamed of last century). Thus, Merkel must protect the present order that Trump is challenging and she is lying about why she is doing it. 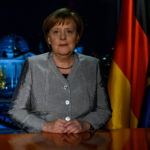